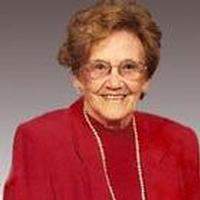 Anne Small (Burhans) Doering died and entered into eternal rest on Saturday, May 12, 2007 at Franklin County Memorial Hospital in Franklin, Nebraska at the age of 91 years, 9 months and 2 days.
Anne was born on August 10, 1915 to William and Daisy (Small) Burhans at Sentinel Butte, North Dakota. She was educated at the Sentinel Butte High School in Sentinel Butte, North Dakota.
On June 8, 1937, Anne married the love of her life, William Alton Doering in Glendive, Montana. This union was blessed with the birth of three children, Polly, Peggy, and David.
The Doering family moved to Franklin, Nebraska in 1950. Anne worked as a receptionist for her husband in his medical practice. She also owned and operated the Style Shoppe and the Yarn Barn in Franklin.
An avid Husker fan, Anne and Bill attended many Husker games. Anne also enjoyed golfing, bowling, and all sports. As a family, the Doerings traveled extensively to many medical conventions throughout the United States. Anne was an active member of the Franklin Order of Eastern Star; the Franklin PEO, serving as treasurer for many years; and the Hot Slotters. She was also a 57 year member of First United Methodist Church in Franklin.
Even though Anne enjoyed all of the activities in which she participated, the real passion of her life was her family. Anne and Bill were always together. They attended all of the activities in which their children, grandchildren, and great grandchildren participated.
Anne is preceded in death by her parents, William and Daisy Burhans; one brother, William Burhans; and one sister, Polly Thompson.
She leaves to treasure her memories, her husband William of Franklin, Nebraska; two daughters, Polly and husband Gil Feis of Lincoln, Nebraska and Peggy and husband Reynold McMeen of Broken Bow, Nebraska; one son, David Doering of Franklin, Nebraska; five grandchildren, Mary Anne Karczewski, William B. Feis, Stephanie A. Holcomb, Jeffrey R. McMeen, and Jeremy W. McMeen; 13 great-grandchildren; a host of other relatives and friends.

Memorial Services will be held at the United Methodist Church in Franklin, Nebraska on Wednesday, May 12, 2007 at 11:00 AM with Pastor Neil Kloppenborg officiating. Inurnment will be held at the Greenwood Cemetery, Franklin, Nebraska. Memorials may be made to the donor's choice in memory of Anne, or to the family
and condolences may be sent to: www.hutchinsfh.com
A book signing will be held on Tuesday, May 15, 2007 from 8:00 AM - 8:00 PM at the funeral home.

To order memorial trees or send flowers to the family in memory of Anne Doering, please visit our flower store.