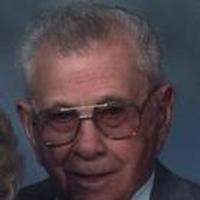 Alvin Ivan Haussermann was born northwest of Bloomington, Nebraska, on February 2, 1918, on the family farm. He was the son of Henry and Helen (Rebman) Haussermann. Alvin was baptized at St. Pauls Lutheran Church, north of Republican City, Nebraska on April 21, 1918.

He was united in marriage to Katherine Emma Treddenbarger on October 14, 1941. To this union were born two daughters - Shirley and husband Gerald Grimes of Corydon, Iowa, and Nancy and husband John Grimes of Marshalltown, Iowa; and a son - LeRoy and wife, Verdell Haussermann of Bloomington, Nebraska.

Katherine passed away on April 29, 1982, at Kearney, Nebraska. On June 4, 1983, Alvin was united in marriage to Geraldine Reese Schriner.

In October of 2000, Alvin was awarded his high school diploma through the Veteran's Administration.

Hutchins Funeral Home, Franklin, Nebraska, was in charge of services.

To order memorial trees or send flowers to the family in memory of Alvin Haussermann, please visit our flower store.