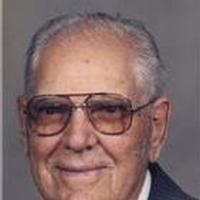 ?Bibliography of Allen "Al" Lars Petersen
Allen "Al" Lars Petersen died and entered into eternal rest with God on Monday, March 12, 2007 at the Golden
Living Center in Franklin, Nebraska.
Al was born on October 1, 1915 to Andrew and Blanche (Emal) Petersen on a farm in Garfield County, Nebraska.
He was one of nine children born to this family.
Al attended elementary school at Ash Grove Grade School, north of Bloomington, Nebraska, graduated from
Bloomington High School in Bloomington, Nebraska in 1934, and attended the University of Nebraska at Lincoln.
On November 11, 1937, Al married his childhood sweetheart and the love of his life, Luella Folkers, at Franklin,
Nebraska. This union was blessed with the birth of five children, Barbara, Linda, Gary, Jean, and Dale. Al was
baptized and professed his faith to become a member of the Franklin Methodist Church on Palm Sunday, April 2,
1944 under the guidance of Rev. Merrill R. Willis.
The family made their home in Lincoln, Nebraska, where Al worked for the Nebraska Highway Department for 10
years. They later moved to LaMoille, Illinois, where Al farmed for 15 years, before returning to Franklin, Nebraska,
where Al worked with Blank Motor Company for 12 years and as Franklin County Roads Supervisor for 17 years.
Due to failing eyesight and failing health, Al and Luella moved from their own home to the Golden Living
Community in July 2002.
Al was an active member of the Franklin Community for many years, serving on the Board of Directors of Golden
Age Village, and a member of Franklin First United Methodist Church. Within the church, Al was active in the United
Methodist Men, Sunday School Superintendent, and served on the Board of Trustees and Memorial Committee.
Al enjoyed woodworking, traveling, and camping, but the true passion of his life was his wife and his family.
Al is preceded in death by his parents; four brothers Neale, Ross, George, and Warren; and two sisters, Christine and
Kiersel.
He leaves to treasure many wonderful memories his loving wife, Luella Petersen of Franklin, Nebraska; two sons,
Gary and wife Ann Petersen of Aurora, Colorado, and Dale and wife Donita Petersen of Edmond, Oklahoma; three
daughters, Jean and husband Paul Konshak of Radcliff, Kentucky, Linda and Carl Almquist of Evergreen, Colorado,
and Barbara and Wayne McCray of Warren, Texas; nine grandchildren; nine great-grand children; two sisters, Ruth
Petersen of Franklin, Nebraska, and Reye (Mrs. Adolph) Goedeken of Oskaloosa, Iowa, a host of other relatives,
nieces, nephews and friends.
Memorials are suggested to the Franklin EMTs or Franklin First United Methodist Church.
Memorial service will be held on Thursday, March 15, 2007 at 11:00 a.m. at First United Methodist Church in
Franklin, Nebraska with Pastor Neil Kloppenborg officiating. Burial will be at Greenwood Cemetery in Franklin,
Nebraska. Hutchins Funeral Home is in charge of arrangements.

To order memorial trees or send flowers to the family in memory of Allen Petersen, please visit our flower store.