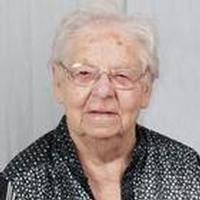 Alice Lydia Marie (Schmidt) Deisley passed away on September 11, 2012 at the Golden Living Center in Franklin at the age of 91 years. Alice was born September 20, 1920 to the late William Fredrick and Anna Lydia (Goebel) Schmidt on a farm south of Riverton. She had nine brothers and one sister. Alice was baptized and confirmed at the Grace Lutheran Church in Franklin. She lived her childhood on a farm south of Riverton. Alice went to Rock Creek School through the eighth grade.

She always said she walked a half mile across the pasture with her brothers to school. One year she was the only girl in school. She loved it when her brothers would let her play baseball with them. One time she was at bat and she hit the ball over the fence so she got picked to go to Omaha. She batted once and struck out, end of her baseball career. She started working out of the home at age 16, taking care of babies for different families. She then worked for one of the grocery stores in Riverton. She made $14.00 a week.

Alice met her husband Louis Samuel Deisley at Riverton. Louis was a good friend of her brothers, so one night five of the kids went to a picture show in Red Cloud. Her brother asked Louis to come along. Alice's brothers and sister got in the back seat of the car so Alice had to sit in front with her brother and Louis. Louis came back the next week by himself and that was all it took. They were married on October 22, 1949 at the Lutheran Church in Red Cloud. They lived north of Riverton a short while before buying a farm south of Bloomington where they made their home for 26 years.

Memorials may be directed to the Franklin Fire Department and EMTs.

To order memorial trees or send flowers to the family in memory of Alice Deisley, please visit our flower store.