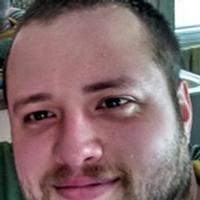 Alexander Tiffany (Knaub) Blakemore was born May 8, 1989 to Helen Jean (Blakemore) and Randy Al Knaub in Lincoln, Nebraska and entered into eternal rest with God, his Creator on December 18, 2016.

Alex and his mom, Helen made a life for themselves in Lincoln, NE surrounded by family and wonderful friends. They were members of First Plymouth United Church of Christ, where Alex was baptized and later confirmed and remains a member today. They were active in Sunday school classes, and later both of them became leaders to the younger children annually at many outdoor retreats they attended and helped organize. Alex loved being a mentor to kids. Alex loved music and played trombone in the jazz band for two years at Irving Middle School and in the First Plymouth Children's Orchestra. Alex graduated from Lincoln High School in 2007 and worked in the cafeteria at UNL East Campus Student Union for 3 years while attending high school and continued working there while attending Southeast Community College studying Electrical Engineering and Computer Science. He loved computers and all things electronic. He moved to Franklin in 2011 to be with his mom and dad on the farm where he loved spending time learning farming and how to live life outside the city. He obtained a job as a cook at The Black Powder Bar and Grill in Franklin and then later took a job with Eagle Communications as an Electronics Technician/Installer for just a little over a year.

Alex was a lover of all things outdoors. He was an adventurist who loved camping, hunting, fishing, working on cars and electronics. He was a free spirit and was always the first to offer a hand of friendship to someone new. He was trusting to a fault and was always trying to help those that others might not. In his youth, Alex was active in Cub Scouts for four years and then Boy Scouts for two years. Then, long term family friends, the Fuller and Swankoski families invited them to join them in a Black Powder Muzzle Loading group. Alex and Helen were members of The Rock Creek Renegades out of Hallam, NE and participated in many Rendezvous with these families in the state of Nebraska. Alex and his mother tent camped all over the state and delighted in nature in every way. Alex's love for cooking came from all those amazing outdoor meals. They knew God was in the wind and the grass and chose to spend as much time as possible embracing that.

Alex leaves to mourn his passing his loving mother and step father, Helen and Mike Ingram of Franklin; infant son, Logan Ray Blakemore, a step brother Eric Ingram and his wife Megan and daughter Taylor of Hildreth, NE; step-sister Erin Ingram and special friend Michael Greiner of Gretna, NE, and step-sister Emily Ingram of New York City, along with many other friends and people who considered him family.

A viewing was held on Friday, Dec. 23 from 5-7 p.m. at Hutchins Funeral Home in Franklin with a memorial service held at the Franklin Methodist Church on Thursday, Dec. 29 at 11 a.m. A Celebration of Life service will be held at First Plymouth Church in Lincoln, NE in mid-January.

Memorials are suggested to the family with recipients to be determined at a later date.

To order memorial trees or send flowers to the family in memory of Alexander Blakemore, please visit our flower store.